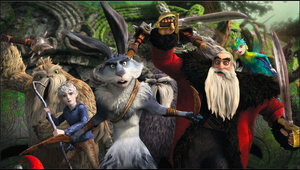 A list of the weapons used by the characters from Rise of the Guardians and The Guardians of Childhood.

Jack uses a wooden staff as a conduit for his powers. The staff was given to him by the Man in the Moon because when Jack was still human, he used it to save his sister right before he drowned. It was believed that the staff was the source of Jack's power but then it was later revealed that this is not true, it was just a conduit for him to channel the magic of winter that had really been inside of him, seen when he repaired it through sheer force of will after Pitch snapped it in half.

According to William Joyce, its name is Twinetender and came from an a willow that stood on the ancient burial grounds of Mohican Indians. The Mohicans called it Warriors Willow for from its branches came the strongest and most flexible bows, staffs and arrows that their warriors and hunters fashioned. The warrior dead of the tribe were buried among the willows roots and each limb was said to have the spirit of a warrior within its heartwood who could help the person that wielded it, but only if that being were brave and true of heart. Jacks staff was his friend, his comrade his protector. It would alert him to danger. It could focus jacks power to speak to the wind and learn the language of leaves. [1] 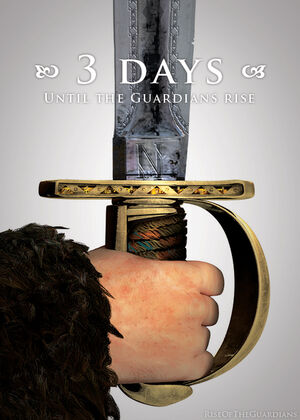 North is a master swordsman and he is skilled in using different swords. He considers himself the best swordsman in the world. In the film he carries two sabers.

In The Guardians of Childhood, North is shown using a wide variety of other swords that he has acquired or forged over the years. In Nicholas St. North and the Battle of the Nightmare King, North faces off against Pitch, who has taken possession over the village's bear. North throws six daggers at the Bear and finishes it off with his sabers, the Rare two-handed Polish Keep Sweeper.

With the help of Robot Djinni's, North then crafts various swords and daggers, from the remains of a meteor that marked the foundings of Santoff Claussen. Three of these new weapons included; The Tickler, a long sword, the Royal Slavic Hacker, a broad sword, and Ottoman Field Clearer, a curved sword.

At the end of the the Battle of the Nightmare King, MiM bestows onto North, one of the relics of the Moon Clipper, King Tsar's XI Sword, one of the few weapons capable of injuring Pitch. He uses this sword for the remainder of the series. 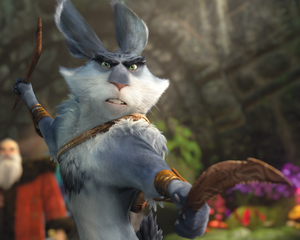 Bunnymund wields these enchanted boomerangs as his weapon of choice. They are made of wood, one is a little straighter and carved with a vaguely saw-like edge. The boomerangs are enchanted in ways that make them more effective weapons, as they always return to Bunnymund's hands (paws?) even if he's not looking; he merely holds up his hand and they return to his grip. It is likely they are also more durable by the magic in them, so they don't break.

In E. Aster Bunnmund and the Warrior Eggs at the Earth's Core!, Bunnymund does not use a weapon, but rather gains mysterious powers any time he eats a chocolate egg of his own recipe. He does however, carry a staff. 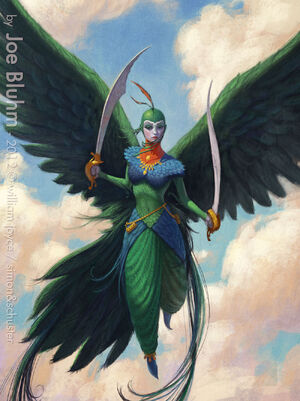 In the Film, Tooth does not carry a weapon, but her wings are sharp enough to cut through Pitch's Nightmares.

Sandy's whips are made from his Dreamsand, and act as his main weapon of choice. They manifest in his hands whenever he wills it and lash out in ways that make them seem alive, they are actually a part of Sandy's body.

He can be ferocious with his whips, seen when he first fought Pitch Black.

The yetis have an amazing arsenal of gleaming clubs, swords and spearguns, all forged with the dust of fallen stars. One of the most common choice of weapon is the arrow gun with mountain-to-mountain accuracy and a few of the named weapons include, the Knuckler, Abominable Mood Swing and the Dinner Knife. The Abominable Mood Swing in particular is one of the most feared that only a few may wield, such as Yaloo, leader of the Yetis.

Nightlight possesses a staff with a diamond like dagger on the top, created from the baby tear of MiM. With the dagger, Nightlight was able to pierce Pitch's heart and seal him away, at the cost of his own freedom. Years later, a moon beam would eventually become entrapped within the diamond head, releasing both Nightlight and Pitch. With the moonbeam as a new companion, Nightlight can use its light to fight off Fearlings. 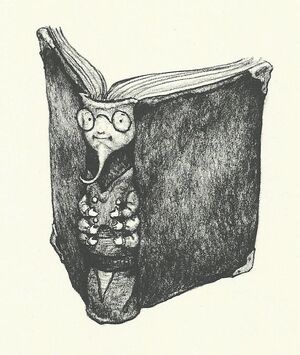 Ombric has a vast collection of spell books from all over the world, even from his birth place of Atlantis. Pitch sought out to obtain Ombric's library for his own purposes, and in one last desperate attempt to keep the knowledge out of Pitch's hands, Mr. Qwerty, Ombric's assistant and a glow worm, ate the entire library and sealed himself within a cocoon. He would later emerge as a moth with page-like wings, with the knowledge of all Ombric's books and able to summon the text onto his pages upon request. 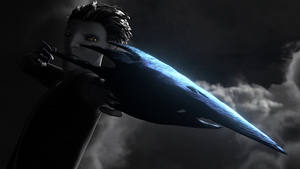 In the film, by turning Sandy's Dreamsand into Nightmares, Pitch is capable of crafting just about any type of weapon that he can think of, including an army of Nightmares.

In battle, Pitch wields this horrific scythe he manifests with this black sand, which induces nightmares. The scythe is very large, useful for attacking at a moderate distance. He first wielded it against Sandy, and later against all the Guardians, even attempting to use it to kill Jack, but was stopped by a resurrected Sandman.

While Pitch favors using a scythe, he can craft other weapons as well, one being an arrow, which he uses against Sandman, and later a spear against Jack Frost and North. 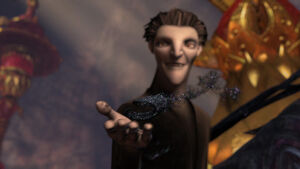 In the The Man in the Moon, Pitch is in possession of a twisted wooden staff, which he lost after Nightlight sealed him away. Also, in The Sandman: The Story of Sanderson Mansnoozie, Pitch carried a giant harpoon on his ship, the Nightmare Galleon. With his Dream Pirate crew, Pitch would harpoon shooting stars and drag them into moons, planets and even black holes, including Sandy's ship which crashed onto Earth.