Rise of the Guardians Wiki
Register
Don't have an account?
Sign In
Advertisement
in: Books, Chapter Books

Nicholas St. North and the Battle of the Nightmare King

Nicholas St. North and
the Battle of the Nightmare King

Nicholas St. North and the Battle of the Nightmare King is the first chapter book in The Guardians of Childhood series.

Nicholas St. North, a daredevil swordsman seeking treasure in the fiercely guarded village of Santoff Claussen finds, instead, the great wizard Ombric Shalazar and a battle against the Nightmare King and his evil Fearlings.[1]

Before St. Nick was St. Nick, he was North, Nicholas St. North, a daredevil swordsman, ruffian, and notorious outlaw. His prowess with weaponry of all kinds was infamous and he sought riches and treasure at all costs. Hardly hero material.'But heroes are not born—they're tested.''When real villains enter the scene in the shifting shape of Pitch and his dreaded Fearlings, North finds a different use for his famed fighting abilities. Here, in this first in a series of epic Guardian adventures, meet the legendary St. Nick. You've known about him for years, but, it turns out, you don't really know him at all...[2]

The next chapter in our ongoing saga will be E. Aster Bunnymund and the Warrior Eggs [3]

Before he was Santa, Nicholas St. North led an exciting life full of daring adventures. William Joyce interviews the future Mr. Claus about his past, the other Guardians, and what he thinks of the cast of colorful characters that live at the North Pole.[4]

William Joyce: When you were younger, where did you think you'd end up?

Nicholas St. North: Well, they didn't have Las Vegas when I was a kid. Or Disney World, so those just weren't an option. I'm kidding. KIDDING. But the North Pole? Never saw myself there.

Joyce: How do you think you came across in my telling of your story?

Nick St. North: Much better than I expected, to be honest, and since I'm Santa Claus I am, you know, I'm always honest. Your portrayal of me is you know, balanced. You got the good me and the ... wild me. I'm certainly jolly and you caught that. And the temper thing ... you didn't shy away from that. And the bravery and the fun. The fun me. I liked that. Because I'm, you know, fun. FUN! A fun guy.

Joyce: Could you tell us a little about the Guardians of Childhood?

Nick St. North: Great group. The best. Really. So glad to be a member. Sandman, Man in the Moon, Tooth Fairy, the Egg guy, that Frost kid ... just terrific. We all have our own thing, but we work together very, very well. Fighting the Boogeyman, Pitch is his real name. Not many people know that. But, yeah, I think we do a lotta good work together.

Joyce: Which Guardian would you choose to stand beside you in the thick of battle?

Joyce: What do you think makes you such a great Guardian?

Joyce: If you had a chance to change one thing in your past, would you? What would it be?

Joyce: If you could learn one bug or animal language, what would it be?

Nick St. North: Gosh. I know almost all of them. That's how I get a lot of my info on the naughty or nice thing. Pets are usually very reliable for that. I speak fluent hamster, which is good, because hamsters, they know EVERYTHING. I even speak leech. Which isn't much help really. There are some Irish accents I have trouble with. I love how they sound, but I need subtitles if it's a movie. And the Jersey Shore kids. Can't understand a word.

Joyce: How are the elves to work with?

Nick St. North: Well, we are all old, old friends. We've known each other since day one. But, honestly, I wish they were a little taller.

Nick St. North: Yes. They get stepped on A LOT. Especially by the Yeti. It gets messy.

Nick St. North: "Abominable" is not the preferred designation. As native Himalayans, they prefer "Yeti" or Abominable Snowperson.

Joyce: So you have Abominable Snowpersons working at the North Pole?

Nick St. North: Oh yes! They actually do most of the toy development and construction. Which I am still, like, amazed by. I mean their fingers are huge, HUGE. Big as bean bag chairs. But they can do detail work! All the little stuff--eyes on dolls, you name it. They're also awesome warriors, super tidy and excellent at baking. Their cookies? Outta control and Low Cal.

Joyce: What about the elves? They don’t do toys?

Nick St. North: No, no, no, no. That's a huge misconception. The elves just play with the toys as sort of market testing ... to see if they're, you know, fun. Otherwise they're just sort of custodial ... sweeping, mopping. Oh! And they do party decorations and caroling. 20,000 elves singing 'Oh, Christmas Tree'? I get teary just talking about it.

Joyce: What do you think would have happened to you if you weren't chosen to be a Guardian?

Nick St. North: Definitely not retail or politics. They're too, too, I don't know ... pushy. I've always liked gardening. Landscape architect? Or social work? Or maybe directing. Features only. No TV.

Joyce: How would you most like to be remembered?

Nick St. North: Probably the whole Christmas Day thing. And my work with reindeer. Proud of that. And the kids. Yeah. My work with the kids, that's the biggie.

Launching the Guardians series, a chapter book counterpart to Joyce's Guardians of Childhood picture book series, this beguiling clash of good vs. evil brings together several legendary figures, updated by Joyce. Key players include Ombric, a wizard who teaches the children of the village of Santoff Claussen how to make anything they imagine come true; Nicholas St. North, a reformed bandit who becomes Ombric's apprentice; Nightlight, a "spectral boy" who is guardian to Tsar Lunar, ruler of the moon; and Katherine, a brave foundling whose dream foreshadows what North will become: "a powerful figure of unending mirth, mystery, and magic, who lived in a city surrounded by snow." All join forces to defeat Pitch, the King of Nightmares (called "Boogeyman" by children), a mission that culminates in a dramatic battle in the Himalayas. With agility and flair, Joyce and Geringer build layer upon layer of fantasy and provide rich background information about the characters, while leaving much to readers' imagination—and much still to be revealed. As in the narrative, shadow and light play enticing roles in Joyce's b&w illustrations. Ages 7–11. Agent: Michael Siegel & Associates. (Oct.)

"Nicholas St. North and the Battle of the Nightmare King stole my son! The book came into our house, and the boy disappeared, for hours. Eventually he returned, but it seems that his imagination never came all the way back. A part of him will always remain tangled in the deep, dark, dazzling, insouciant mythology of this latest and most wonderful of William Joyce’s worlds.”—Michael Chabon, Pulitzer Prize–winning author of The Amazing Adventures of Kavalier & Clay

"The authors do a great job of creating excitement and intrigue, and for those who love to wend their way through extraordinary tales, this novel will not disappoint. The illustrations are wonderful charcoal, graphite, and digital renderings that convey all the magic and fear contained within the story. Fans of Dave Barry and Ridley Pearson’s Peter and the Starcatchers (Hyperion, 2004) may want to give this book a try."

"William Joyce’s magnificently creative illustrations, rendered in charcoal, graphite, and digital media have an old world feel that extends the text. In the world of fantasy, this book rises above the rest."

Streaks of preciousness mar, or at least mark, an "origins" tale framed as a monumental struggle between the King of Nightmares and a Cossack bandit plainly destined for a later career bringing gifts to children on Christmas Eve.

Escaping 1,000 years of captivity, Pitch, the Nightmare King, has sent hordes of Fearlings out to darken the dreams of children worldwide and attacked the happy Siberian town of Santoff Claussen. Orchestrated by Tsar Lunar, the Man in the Moon, a small company sets out to gather the first of five ancient relics that will help defeat Pitch. The band is made up of kindly old wizard Ombric Shalazar (last survivor of Atlantis and inventor of "time, gravity, and bouncing balls!"); his ward, the intrepid young orphan Katherine; a mysterious elfin creature; and, last but not least, Nicholas St. North—an exuberant former bandit chieftain turned inventor who is "no longer a thief of treasures but a buccaneer of fun" thanks to Ombric's tutelage in magic and science. With help from an army of yetis led by the Lunar Lamas (who are quaintly described as "inscrutable" and also look identical in the accompanying illustration), Pitch is fended off in a great battle in the Himalayas, the relic is recovered and it's off to further episodes. Many further episodes, as this is just the opening novel in an ambitious multimedia project dubbed "The Guardians of Childhood." (The Man in the Moon, 2011, is the companion opening picture book in the project.)

Gr 4–6—A meteor strikes Earth and from the giant crater it creates, a tree grows. Ombirc, a wise, ancient wizard, tends it and recognizes its magic. Soon the tree is large enough to house not only Ombirc, but a whole community of curious dreamers who live in harmony with nature and with one another. All is well in Ombirc's small, idyllic village until Pitch, the Nightmare King, is released from his prison to spread his evil across the land and infiltrate Santoff Claussen. Enter the heroes, Nicholas St. North, a wandering bandit-turned-good-guy, and Young Tsar Lunar, last member of the Lunanoffs and the protector of dreams. Together with Ombric and Katherine, a young resident of Santoff Claussen, these forces defeat The Nightmare King. This is an imaginative adventure with more than its share of fantastical beings and occurrences. In fact, there may be so many strange people, places, and things that struggling readers may find themselves distracted from the story. Some of the language is also a bit awkward. That being said, the authors do a great job of creating excitement and intrigue, and for those who love to wend their way through extraordinary tales, this novel will not disappoint. The illustrations are wonderful charcoal, graphite, and digital renderings that convey all the magic and fear contained within the story. Fans of Dave Barry and Ridley Pearson's Peter and the Starcatchers (Hyperion, 2004) may want to give this book a try.—Mary Beth Rassulo, Ridgefield Library, CT 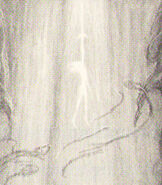 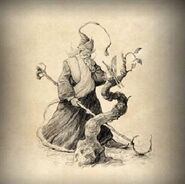 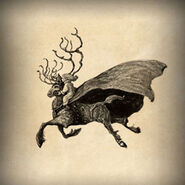 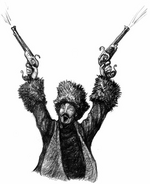 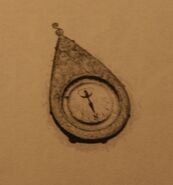