This page lists all Rise of the Guardians releases for Apple and Android devices.

Your favorite DreamWorks Heroes (& Villains!) from Kung Fu Panda, How to Train Your Dragon, Shrek, Penguins of Madagascar, Croods & more are united in a brand new mobile game!

Form a dream team of companions, create your own Hideaway base, and start your journey to save the DreamWorks universe!

Hidden deep within the skies exists a special realm called The Between, where all the worlds of DreamWorks are connected. Guarded by Master Oogway, the Dreamstones in this realm contain the energy forces of the DreamWorks worlds… but mischievous creatures known as the Droplets have emerged, led by the greedy King Globby, and they’re looking to take the Dreamstones for themselves!

Stop the Droplets and other villains from getting their hands on the Dreamstones – the fate of the entire DreamWorks universe is at stake!

Lead your team of fully animated DreamWorks characters in a fast-paced, action-packed quest to recover the Dreamstones! Command each hero’s actions and unleash powerful skills to defeat your enemies!

Adventure through the Valley of Peace from Kung Fu Panda, to the Isle of Berk in How to Train Your Dragon, or the Swamp from Shrek and many more memorable DreamWorks locations! Be prepared to make quick decisions to overcome the hidden challenges in your travels!

Form An All Star Team

Discover, collect, and customize over 40 DreamWorks characters including Po, Shrek, Hiccup, Eep, Donkey, Turbo, Mr. Peabody, and more - each with their own unique set of upgradable abilities. Equip valuable gear and use magical items to aid you along the way!

Customize a Hideway in the Clouds

Construct and design your very own base in the sky – just the way you want it! Build Mr. Ping’s Noodle Shop, Gobber’s Forge, the Dragon Training Ring and other iconic buildings from the DreamWorks universe to reveal special features!

Team up with players across the globe to send gifts, chat, and crush the bosses in the Daily Challenges. Compete in friendly competition in the Arena and climb to the top of the Leaderboards for the ultimate recognition!

Rise of the Guardians 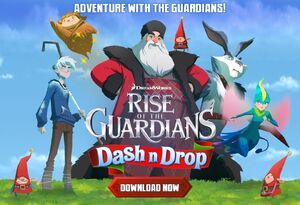 Pitch tries to take over the world again by ruining Christmas. The Guardians will joined ones again to help North deliver the presents and keep everyone believing in the Guardians.

A legendary adventure based on the DreamWorks Animation featured film, Rise of the Guardians!

Collect and restore belief to children around the world as you dash through the evening sky. Be sure to grab some elves and coins along the way, but watch out for evil Nightmare creatures who will try to stop you! Download the Rise of the Guardians mobile game, DreamWorks Dash n Drop, on the App Store ([1]) and on Google Play ([2])! 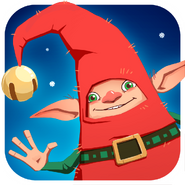 iStoryTime, through their parent company Zuuka, inc., released a Rise of the Guardians Movie Storybook app available as a regular version on Android devices, and as a deluxe version for Apple devices, on various dates throughout November, 2012. It was also made available for purchase through other retailers, such as Amazon.[1] A version for Nook devices was also released, which is identical to the regular version, but also contains additional information on the main characters.[2]

The “Rise of the Guardians” storybook app retells the exciting story of the movie. Join forces with the legendary Guardians in this narrated storybook. Fans follow Jack Frost, North, Tooth, Bunny and Sandy as they come together for the first time to protect the hopes, beliefs and imagination of the children from the evil spirit known as Pitch.

Auto Play, Read To Me, and Read To Myself narration options are also offered.

The “Rise of the Guardians” interactive storybook app retells the exciting story of the movie. Join forces with the legendary Guardians in this fully animated, narrated and interactive storybook. Fans follow Jack Frost, North, Tooth, Bunny and Sandy as they come together for the first time to protect the hopes, beliefs and imagination of the children from the evil spirit known as Pitch.

Auto Play, Read To Me, and Read To Myself narration options are offered and the interactive app further immerses fans into the action with two engaging activities, including:

Rise of the Guardians App 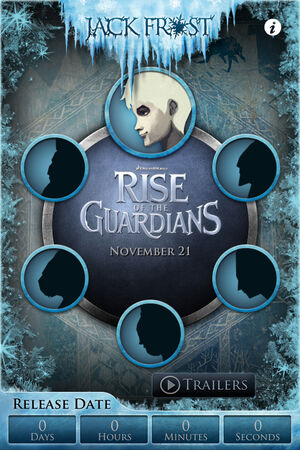 Learn more about the Legendary Guardians and the Nightmares King, Pitch and discover their secrets. ROTGApp

Meet the Guardians - more than a collection of beloved childhood legends - they are a group of heroes, each with extraordinary abilities. DreamWorks Animation invites you to explore their magical worlds and discover their legendary mythology. Download the Rise of the Guardians app and Believe!

Retrieved from "https://riseoftheguardians.fandom.com/wiki/List_of_Rise_of_the_Guardians_mobile_apps?oldid=107677"
Community content is available under CC-BY-SA unless otherwise noted.