Hugh Michael Jackman is an Australian actor and producer who is involved in film, musical theatre, and television. He's also the voice of Bunnymund in the movie, Rise of the Guardians.

Jackman married Deborra-Lee Furness on 11 April 1996 at St. John's in Toorak, Victoria, a suburb of Melbourne. They met on the set of Australian TV show Correlli. Jackman personally designed an engagement ring for Furness, and their wedding rings bore the Sanskrit inscription "Om paramar mainamar", translated as "we dedicate our union to a greater source".

Jackman has won international recognition for his roles in major films, notably as superhero, period, and romance characters. He is known for his long-running role as Wolverine in the X-Men film series, as well as for his leads in Kate & Leopold, Van Helsing, The Prestige, Australia, Real Steel, and Les Misérables. His work in Les Misérables earned him his first Academy Award nomination for Best Actor and his first Golden Globe Award for Best Actor in a Musical or Comedy in 2013. He is also a singer, dancer, and actor in stage musicals, and won a Tony Award for his role in The Boy from Oz.

In November 2008, Open Salon named Jackman one of the sexiest men alive. Later that same month, People magazine named Jackman "Sexiest Man Alive." A three-time host of the Tony Awards, winning an Emmy Award for one of these appearances, Jackman also hosted the 81st Academy Awards on 22 February 2009.

In Rise of the Guardians 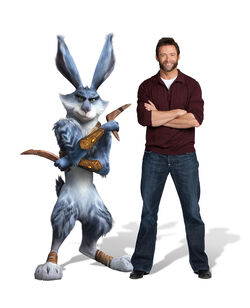 Hugh Jackman voiced Bunnymund in Rise of the Guardians. He also was the one that made Bunnymund more Aussie as the producers had an idea of making him Australian, and then Hugh tried to put in as many phrases as he could.[1]

Retrieved from "https://riseoftheguardians.fandom.com/wiki/Hugh_Jackman?oldid=102944"
Community content is available under CC-BY-SA unless otherwise noted.