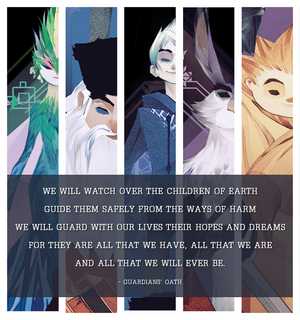 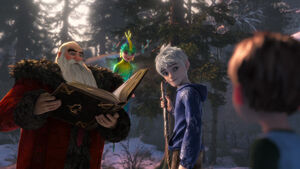 The Guardians' Oath is an oath taken by the Guardians as a promise to protect and keep belief in the children of Earth.

Will you, (name), vow to watch over the children of the world?
To guard them with your life, their hopes, their wishes, and their dreams.
For they are that we have, all that we are, and all that we will ever be.

The Man in the Moon invented the Guardian Oath many years ago when the first Guardians were brought together. The Oath was originally inspired by the last memory he had of his parents. They ordered to his protector, Nightlight, to kneel and take the oath:

MiM knew he too could be a guardian of the children of Earth, just like Nightlight was to him, and gathered his friends North, Katherine, Bunnymund, Toothiana and Sandy to the Moon, and like his parents before him, asked his friends to "Kneel and take this Oath."

Retrieved from "https://riseoftheguardians.fandom.com/wiki/Guardians%27_Oath?oldid=102624"
Community content is available under CC-BY-SA unless otherwise noted.