Rise of the Guardians Wiki
Register
Don't have an account?
Sign In
Advertisement
in: Books, Chapter Books

E. Aster Bunnymund and the Warrior Eggs at the Earth's Core!

E. Aster Bunnymund and
the Warrior Eggs at the Earth's Core!

E. Aster Bunnymund and the Warrior Eggs at the Earth's Core! is the second chapter book in The Guardians of Childhood series.

Forget the bunny trail. E. Aster Bunnymund is on a warpath. In this second chapter book in William Joyce’s The Guardians series, sometimes you have to crack a few eggs.

Pitch, the Nightmare King, and his Fearlings had been soundly driven back by Nicholas St. North and company in the first Guardians’ adventure. But now Pitch has disappeared completely—and out of sight does NOT make for out of mind. It seems certain that he’s plotting a particularly nefarious revenge, and the Guardians suspect he might have gone underground. But how can they find him there?

Enter E. Aster Bunnymund, the only emissary of the fabled brotherhood of the Pookas—the league of philosophical warrior rabbits of imposing intellect and size. Highly skilled in martial arts (many of which he invented himself), Bunnymund is brilliant, logical, and a tunnel-digger extraordinaire. If the Guardians need paths near the Earth’s core, he’s their Pooka. He’s also armed with magnificent weapons of an oval-sort, and might just be able to help in the quest for the second piece of the Moonclipper

This second book in The Guardians series is about much more than fixing a few rotten eggs—it brings the Guardians one step closer to defeating Pitch!

The next chapter in our ongoing saga will feature the discovery of Toothiana: Queen of the Tooth Fairy Armies. [1]

"Clever and packed with quirky, imaginative creations, lovingly illustrated by Joyce."—Booklist"Children will read and reread the story to enjoy all the nuances of this plot-driven fantasy with strong visual imagery. Joyce’s fans are sure to welcome his newest offering." SLJ, June 2012

Gr 4–6—Joyce weaves together imaginary beings, fictional characters, and references to real geographic places to create his fantasy world. Two spreads of sketches show "our heroes" and "the villains" to help readers sort out the cast of players. The characters must travel to Easter Island where the Pooka lives. There they meet E. Aster Bunnymund, who explains that he makes the best chocolate in the universe. He uses milk from an "intergalactic bovine creature that on occasion jumps over the Moon" or another chocolate concoction of "marshmallow made from the whipped eggs of Asian peacocks." Still another chocolate is made with "cacao leaves that grow in the dark center of the great caves of Calcutta; it contains a pinch of mint from the ice caps of Mars." Not only can he make delicious treats, but he can also travel through space and help the Guardians as they battle The Nightmare King. Chapters have fun and informative names and there's lots of "egg-straordinary" wordplay. Children will read and reread the story to enjoy all the nuances of this plot-driven fantasy with strong visual imagery. Joyce's fans are sure to welcome his newest offering.—Helen Foster James, University of California at San Diego 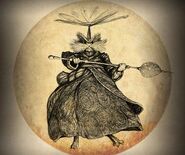 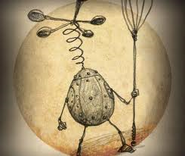 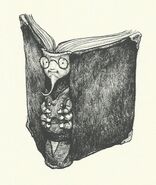 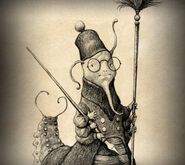