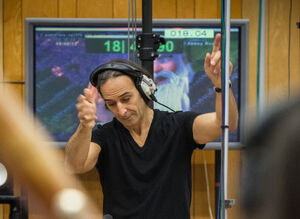 Alexandre Michel Gérard Desplat (French pronunciation: ​[a.lɛk.sɑ̃dʁ dɛ.pla]; born 23 August 1961) is a French film composer. He has received five Academy Award nominations, six BAFTA nominations, six Golden Globe nominations, and two Grammy nominations. Desplat won his first Golden Globe for The Painted Veil in 2006 and his first British Academy Film Award in 2011. Among various projects, Desplat has worked on a variety of Hollywood films including independent and commercial successes like The Queen, The Curious Case of Benjamin Button, New Moon, Fantastic Mr. Fox, Harry Potter and the Deathly Hallows – Part 1 and Part 2, and The King's Speech. He is also the composer to "Rise of the Guardians".

Desplat was born in Paris, to a French father and a Greek mother who met at the University of California, Berkeley.[1] After their marriage, they moved back to France, where Alexandre was born. At the age of five, he began playing piano. He also became proficient on trumpet and flute. He studied with Claude Ballif, Iannis Xenakis in France and Jack Hayes in the U.S. Desplat's musical interests were wide, and he was also influenced by South American and African artists and teachers, among whom were Carlinhos Brown and Ray Lema. Desplat swiftly became skilled, both as a performer and a composer.

Desplat has composed individual songs that have been sung in films by such artists as Akhenaton, Kate Beckinsale, Charlotte Gainsbourg, Valérie Lemercier,Miosotis, and Catherine Ringer. He has also written music for the theatre, including pieces performed at the Comédie Française. Desplat has conducted performances of his music played by the London Symphony Orchestra, the Royal Philharmonic Orchestra, and the Munich Symphony Orchestra. Desplat has also given Master Classes at La Sorbonne in Paris and the Royal College of Music in London.

In 2007, he composed the scores for Philip Pullman's The Golden Compass; Zach Helm's directorial debut Mr. Magorium's Wonder Emporium with American composer Aaron Zigman; and the Ang Lee movie Lust, Caution. Prior to these break-out works, he contributed scores for The Luzhin Defence, Girl with a Pearl Earring, Syriana, Birth, Hostage, Casanova, The Nest and The Painted Veil, for which he won the Golden Globe Award for Best Original Score, Los Angeles Film Critics Association Award for Best Music, and the 2006 World Soundtrack Award. He won the 2007 BMI Film Music Award, 2007 World Soundtrack Award, 2007 European Film Award, and received his first Academy Award nomination for Best Original Score for The Queen. He also won the Silver Berlin Bear at the Berlin Film Festival for Best Film Music in The Beat that My Heart Skipped. In 2008, Desplat received his second Oscar nomination for David Fincher's The Curious Case of Benjamin Button. Desplat received his third Oscar nomination and a BAFTA nomination for Fantastic Mr. Fox in 2010, both of which were won by Michael Giacchino for Up.

Desplat has composed music for Largo Winch, based on the Belgian comic; Afterwards a French-Canadian psychological thriller film directed by Gilles Bourdos in English; Anne Fontaine's Coco avant Chanel based on the life of designer Coco Chanel; Robert Guédiguian's L'Armée du Crime; Cheri, reuniting him with directorStephen Frears, whom he collaborated with on The Queen; Un Prophète reuniting with director Jacques Audiard; Julie & Julia directed by Nora Ephron; Fantastic Mr. Fox, directed by Wes Anderson and based on the novel by Roald Dahl; New Moon, directed by Chris Weitz; Roman Polanski's The Ghost Writer; Tamara Drewe; The Special Relationship; and The King's Speech which earned Desplat his fourth Oscar nomination.

In early 2011, Desplat began to write the music to Harry Potter and the Deathly Hallows – Part 2. He reunited with director David Yates, who offered Desplat the opportunity to score the second part after his work on the Part 1 soundtrack in 2010 "enchanted everyone in the control room".[2][3] Desplat's soundtrack sequel to the 2008 film Largo Winch was released in 2011 and was well received. Desplat's 2011 projects included The Tree of Life, directed by Terrence Malick (which he actually recorded in early 2010), A Better Life, La Fille du Puisatier, Roman Polanski's Carnage, and George Clooney's The Ides of March.

Desplat started 2012 with Extremely Loud and Incredibly Close and continued with scores for The Spider's House, the Florent Emilio Siri-directed biopic Cloclo, and Dreamworks Animation's Rise of the Guardians.

Rise of the Guardians

Retrieved from "https://riseoftheguardians.fandom.com/wiki/Alexandre_Desplat?oldid=109887"
Community content is available under CC-BY-SA unless otherwise noted.